Who else is excited about the billion-dollar adult-use cannabis market in Arizona?

Our Arizona Cannabis License Consultants have been eyeing this market for some time. **Update: Adult-use cannabis became legal in Arizona as of November 2020** If that’s not enough proof, as further support, 65% of the state’s population indicated that they would “definitely” vote for cannabis legalization.

It is without a doubt that the Arizona adult-use cannabis program will begin within a few years. The state’s medical marijuana program has proven successful, and after losses from the pandemic, the state could reap tax benefits from the introduction of an adult-use cannabis market.

If all goes as planned, the Arizona adult-use cannabis program can begin by spring 2021.

For your convenience, our Arizona cannabis consulting team diligently reviewed and summarized the Safe and Smart Act, which covers regulations surrounding the looming adult-use cannabis industry.

As a cannabis consulting firm focused on permit acquisition, we focused on areas of the act related to cannabis licensing in Arizona. Below you will find expert advice from our team.

For starters, let’s discuss the types of cannabis licenses that Arizona will issue.

Indeed, the issuance of only two types of licenses is unique to Arizona. Typically, our cannabis license consultants have seen states issue one license per cultivation, processing, testing, and retail cannabis operations.

In contrast to Illinois, Arizona does not plan on issuing licenses for on-site consumption facilities.

Also, the Craft Grower and Infuser Licenses recently issued by Illinois will NOT be issued in Arizona. At this time, let us now further describe the two types of Arizona recreational cannabis licenses. 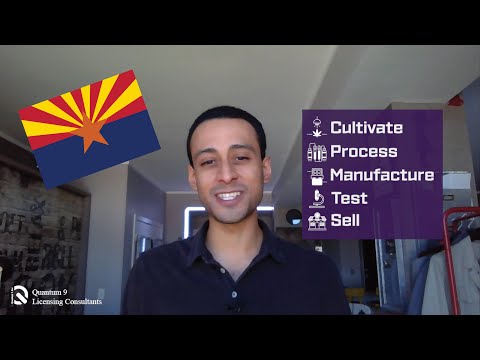 Additionally,  the Smart and Safe Arizona act allows Marijuana Establishments, and agents on their behalf, to:

For clarification, according to the Smart and Safe Arizona Act the following terms are defined as:

To emphasize, our Arizona Cannabis License Consultants want to make clear that the Marijuana Establishment License will give you permission to own three site locations for your company.

Accordingly, the three locations include:

Important to note, the Licensee cannot transfer or sell cannabis or cannabis products to consumers from neither the off-site cultivation nor manufacturing location.

Also, the act would allow two or more Marijuana Establishments to jointly use a single off-site location.

Next, let’s look at the second type of license, a Marijuana Testing Facility License.

Similar to above, our Arizona Cannabis License Consulting team also deconstructed the definition of a Marijuana Testing Facility License.

Besides the Marijuana Establishment and Marijuana Testing Facility License, Arizona will allow for Dual Licensees.

A Dual Licensee means an entity that holds both a medical marijuana dispensary and a marijuana establishment license. I’ll do my best to clarify this below.

Currently, there exists medical marijuana dispensary’s in Arizona. Upon the introduction of the adult-use cannabis program, existing medical dispensaries can apply as an “early applicant” for a Marijuana Establishment License.

A dual licensee can switch operations to a for-profit basis, which would immediately add value to the sole non-profit medical marijuana dispensary operation.

With a Dual License, a cannabis business can:

I know I’m throwing a lot of information at you. So that is why I encourage you to reach out to speak with one of our cannabis consultants in Arizona. We can help you navigate the complex cannabis application process for receiving a license.

First and foremost, the department will issue no more than one marijuana establishment license for every ten pharmacies. In other words, the max number of Marijuana Establishment Licenses will not exceed 10% of the number of Pharmacies in Arizona.

Once the early applicants have been issued licenses, the department will then randomly distribute licenses to qualified applicants.

Early applicants can apply for a Marijuana Establishment License beginning January 19, 2021 through March 9, 2021. The department will issue licenses to the early applicants within 60 days after receiving an application. The department will then issue an ADDITIONAL 26 Marijuana Establishment Licenses to entities in the Social Equity Ownership Program.

Importantly, the licenses will be valid for a period of two years. Afterward, the Applicants will have to renew their licenses and pay the renewal fees.

As for marijuana testing facility licenses, the department may:

Now that you’re aware of the licensing process, you need to ensure that you win a license. In order to accomplish that, you will need a rockstar operating plan laid out in your application.

Our Arizona License Consultants Recommend Having a Rockstar Operating plan

In order to operate a Marijuana Establishment in Arizona, your operation will need to meet the following rules set out by the Department:

For example, localities may:

In some instances, lobbying in a municipality can increase the chances that they allow an adult-use cannabis market. Navigating the politics can be tricky, but our cannabis consultants are experts in lobbying.

Engage an Arizona Cannabis License Consultant to win a license

If it is not clear by now, navigating cannabis industry regulations is extremely tedious. Also, you probably recognize that the Arizona adult-use market will bring tremendous opportunities for investors and entrepreneurs alike.

In order to increase your odds of winning a cannabis license in Arizona, we recommend engaging our Arizona Cannabis Licensing Consultants. Our license acquisition success rate currently sits at 90.12%.

To speak with a marijuana consultant in Arizona, click here.

As the Managing Director at Quantum 9, I help entrepreneurs and investors win licenses and start cannabis businesses in medical and adult-use markets. I manage teams that continuously produce cannabis business license applications that outcompete the best attorneys and largest multi-state operators in the world. We’ve helped clients become cannabis business owners in 27 US States and 6 countries.